The freezing crypto winter and the fall of the FTX empire have hit the entire industry. As confidence in CEXs dwindles, the CEOs of the various platforms have been quick to try and calm their customers’ fears.

Crypto.com has been in the social media spotlight because of this exact reason. Following an AMA from its CEO, the exchange sent an email to its clients assuring everyone that their funds are safe and available for withdrawal or trading on a 24/7 basis.

Funds Are Safe in Crypto.com

According to an email obtained by CryptoPotato with the title “Leading the industry in safety, compliance, and security,” Crypto.com assures its 70 million customers that despite the “difficult week,” the platform is safe and has regulatory approval from several countries around the world as a sign of its commitment to transparency.

In the email, Crypto.com recounts five key points that should be reassuring to its clients during the current storm in the industry.

First of all, they guarantee that client funds are held 1:1 in secure reserves. They also promise to be able to guarantee that users will have their funds available whenever they want them.

The team at Crypto.com further explains that as a sign of transparency, they have shared the addresses of their cold wallets so that users and interested parties can perform a proper analysis. 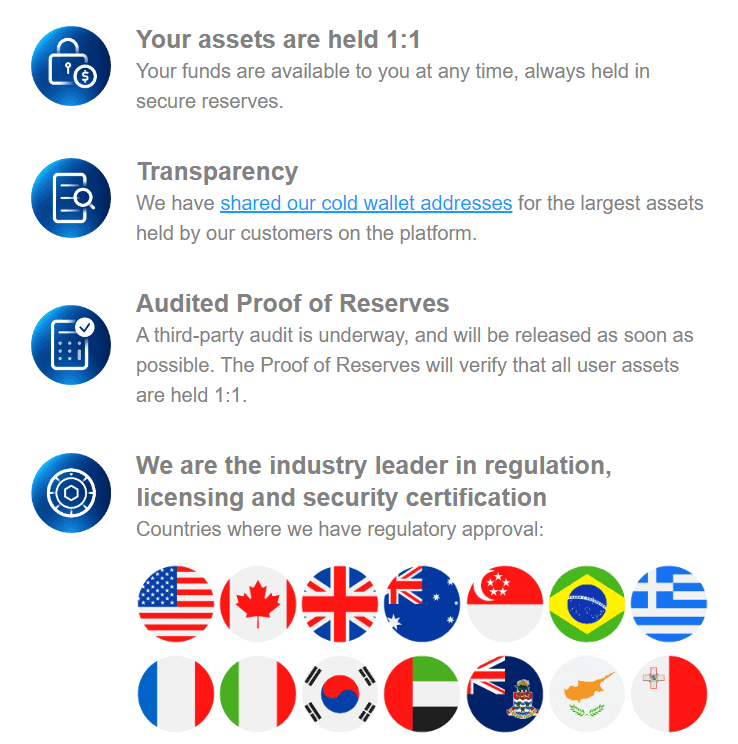 Related to this point, they claim to be working on issuing their proof of reserves which they expect to happen as soon as possible.

Also, Crypto.com has the approval of regulators in 14 countries around the world, including the United States, Canada, the UK, Japan, and Brazil.

Finally, they state that they are committed to their clients’ financial education and publish periodic guides with information on how to increase the security of the funds.

CRO Recovers After a Major Slump

The FTX crash has hit Crypto.com hard, especially since shortly afterward, it was revealed that the exchange sent 320.000 ETH in funds to rival exchange Gate.io just before the latter issued its proof of reserves. Crypto.com CEO Kris Marszalek claimed that this was a mistake and that said funds were returned, although the fact that they received a smaller sum (285.000 in ETH) raised suspicions.

This generated a sharp drop in the price of CRO, the exchange’s native cryptocurrency that touched yearly lows during the early hours of Monday morning, touching $0.0564 on Coinbase, according to Tradingview data.

The CEO’s AMA and the mass email seem to have played in the company’s favor as the token has recovered about 30% from its low, trading around $0.0746 at the time of writing. However, this is still more than 86% below the price it had at the beginning of the year: Around $0.5574.

GET NOTIFIED: Early email alerts on the top news and ICOs.